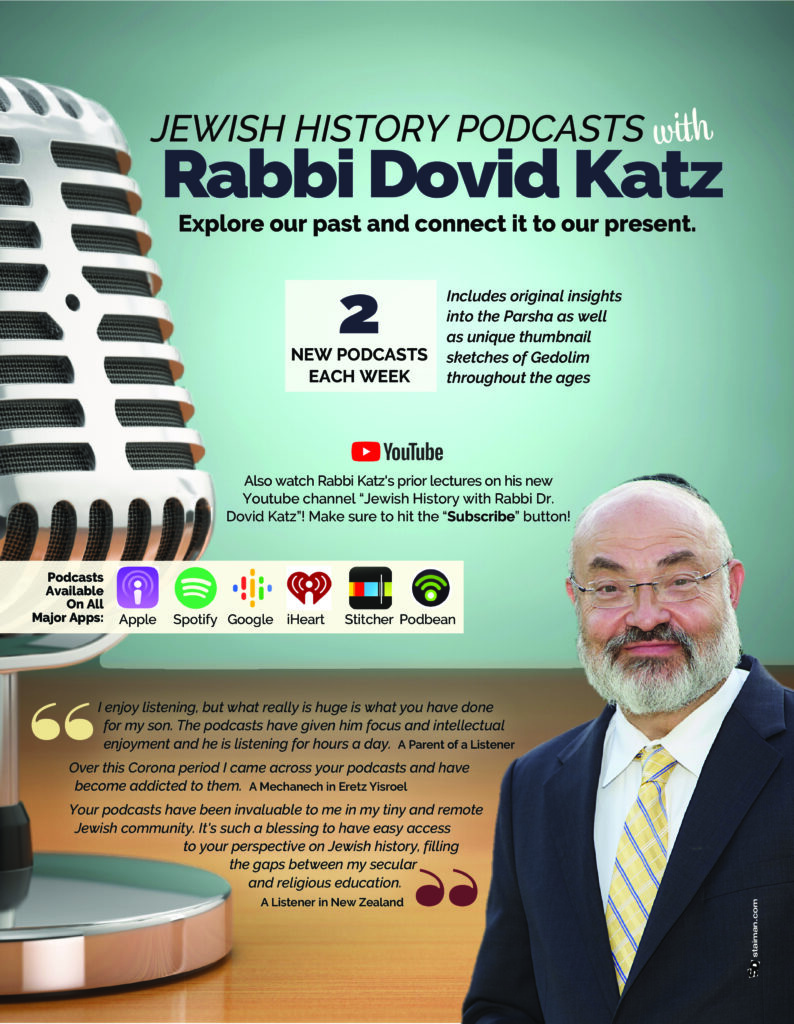 Over the years, Rabbi Katz has delivered numerous lectures about various periods in our history. He also conducts a variety of historically themed tours both locally and abroad. Here is information about some of his lectures and tours:

The Bais Medrash of Bergenfield July 2022

Three Weeks Lecture Series 2022 – From Bavel to Barcelona and Fez to Frankfurt: The Powers of Jewish Courts Throughout the Diaspora

The Struggle to Survive and Thrive under Relentless Pressure: The Orthodox Jews of Galicia in the Modern Era, 1772-1942

Galicia and Galitzianers: A Unique Brand of Yiddishkeit
Lecture on the occasion of the 51st Yahrtzeit of Rabbi Tzvi Elimelech Hertzberg, zt”l

Special Jewish History Lecture  October 2021 – Czechoslovakia and Its Jews: A Tale of Galus, Contents, and Discontents

The Bais Medrash of Bergenfield – July 2021

Lecture Series in Jewish History, 2020-2021 – Roller-Coaster: The State of Israel and the Jewish People in the mid-1980s

Three Weeks Lecture Series 2019 – The Russian Pogroms of 1881: Harbinger of Extermihttp://localhost:8888/wordpress/wp-content/uploads/2021/03/4.threeweeks2019v1.pdfnation or Blessing in Disguise?

The Henry Lehmann z”l Lecture Series in Jewish History – October 2018 – March 2019 Democracy, Peace, and its Discontents: The State of Israel and the Jewish World in the Late 1970s

The Bais Medrash of Bergenfield – July 2016

Mini-Medical Symposium on Jews, Weight and Health
The Jewish Doctor, the Fat King and the Tenth-century Diet that Made History: A Tale from the Golden Age of Spanish Jewry – June 26, 2016 at Tudor Heights  (watch video here)

Congregation Beth Abraham – Bergenfield, NJ – “Where is Yossele?” – The State of Israel and the Jewish Religion – February 2016″

Winter Medical Symposium – Did the Rambam’s Medical Practice Affect his Learning?
(Watch this event on YouTube)

Wine, Vinegar…and Honey?
Lecture on the occasion of the seventh yahrzeit of Mrs. Lenka Katz

Summer 2014 Jewish History Lecture Series:
Murdering Jews for Something They Did Not Do:
Chimerical Christian Fantasies and their Lethal Results in Jewish History

Language, Prayer and The Language of Prayer:
Controversies Chttps://congbethabrahamhertzberg.org/wp-content/uploads/2021/03/30.yahrzeit_lecture_2014_v3.pdfoncerning Different “Hebrews” Over 1500 Years – June 30th, 2014
(in commemoration of the sixth yahrzeit of Mrs. Lenka Katz, a”h)
Video of this lecture is available by clicking here.

Why Wouldn’t They Let Us In? America, Jews, Quotas, Hitler, War: Unintended Consequences of America’s Closing of The Golden Door – In commemoration of the fifth yahrtzeit of Rabbi Katz’s mother, Mrs. Lenka Katz, A”H.
Video of this lecture is available by clicking here.

Ezekiel Landau and Kabbalah: Observations on a Recent Historical Controversy

Summer 2012 Lecture Series – The War Against the Jewish Book

March 2012 – Purim in History & Meta-History: The Talmudic Tension Between the Queen and the Rabbis – at the University of Pennsylvania

The Bais Medrash of Bergenfield – July 2011

Eishes Chayil, Pope, Rabbis
The Battle between Gracia Mendes and Pope Paul IV in the 1550s View this lecture online

Whose Truth? How Jews and Egyptians Battled Over the Passover Narrative 2,000 Years Ago (at the Jewish Museum of Maryland) View this lecture online

Winter 2010-2011 – The Hurricane: The Holocaust, and Steps and Missteps on the Road to the Establishment of a State of Israel

Thoughts on a Transitional Decade: Unity and Disunity in the Baltimore Jewish Community in the 1940s —  This lecture sponsored by the Leibtag family in honor of the first Yahrzeit of Mrs. Rose Leibtag

Prelude to the Twentieth Century:
The Jews in America and in Eretz Yisrael in the Nineteenth Century

The four lectures of “The Slippery Slope” series are available in DVD and CD formats. For further information, contact Rabbi Katz at rabbidkatz@gmail.com

Rabbi Katz often serves as a scholar-in-residence in communities across North America. Here are a few of of his recent visits and lectures:

“Just Between Us: Some Critical Thinking about the Modern Era in Jewish History” – Bais Medrash of Bergenfield (NJ) – August 2019

Purim – A Tale of Two Texts – The tension involved in the publication of מגילת אסתר in Rabbinic history as refracted through ספר עזרא – Spring Valley, NY – February 2020

Purim – A Tale of Two Texts – The tension involved in the publication of מגילת אסתר in Rabbinic history as refracted through ספר עזרא – Boca Raton, FL – February 2020